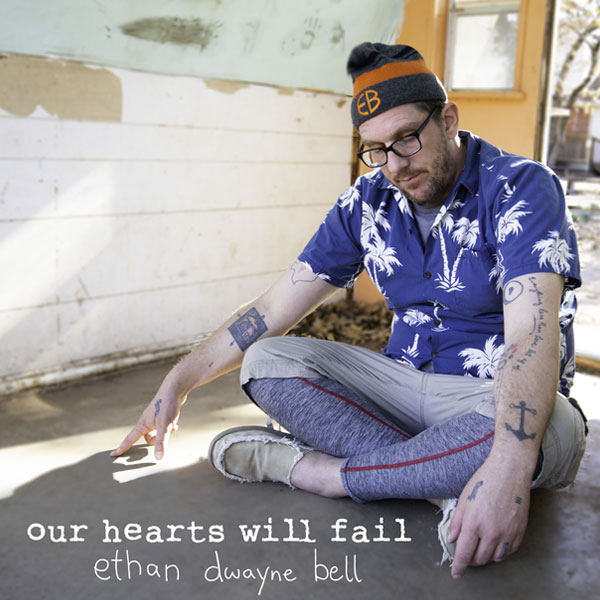 Our hearts will fail

“It’s a hard life running from yourself,” the song “my captain” says. ethan dwayne bell (Texas, USA) knows all about running. At a very young age he had already gathered more passport stamps than most of us in our whole lives. He worked in a coffee shop in Seattle, in a Biergarten in Munich and in a library in Denton. He tried to get into the Peace Corps and then decided not to. All the while he wrote songs, home recorded them (wherever home was) and played shows under different aliases such as Ethan Bell Dips His Pen In The Company Ink or Ethan Bell Is An Asshole. One day ethan wrote a song that made him realize he wanted to live at sea. So he signed up as a sailor and started travelling around the world on oil tankers, army boats and container ships. He would make mix tapes for the other sailors with his songs, and always titled them “our hearts will fail”.

After 11 years at sea, ethan came back ashore to watch his children grow up. For a few years he drove around the US working as a truck driver. He now lives in Denton, Texas, where he homeschools his children while pursuing a career as an English teacher. He has never stopped writing songs.

“our hearts will fail” contains a gourmet selection of some of the best and most significant songs ethan wrote between 2000 and 2007. The album is an intent to save these amazing songs and stories from oblivion and give ethan’s genius the spotlight it deserves.

“our hearts will fail” is the third album of “Whisper & Shimmer”, a series of releases of recordings that have been unjustly forgotten. Songs that were somehow left behind, but that are too powerful to disappear. Previous Whisper & Shimmer releases have been Julie Arsenault’s “The Creature That I Call Myself” and “Home And Other Places I’d Like To Visit” by Me And The Horse I Rode In On.

You can buy the digital album HERE